On December 20th, 2018, GL INFO attended the commemorative conference for the 40th anniversary of the reform and opening-up of China’s petroleum circulation industry

A conference to commemorate the 40th anniversary of the reform and opening-up of China’s petroleum circulation industry was hosted by China Petroleum Circulation Association (CPCA) in Beijing on 20 December 2018. Ms. Liao Na, executive vice president of GL INFO, was invited to attend the conference and deliver a keynote speech entitled “Revolution Apocalypse of Petroleum Circulation in China and Foreign Countries”.  Tracing back the previous development path of the petroleum market and the history of different countries, Ms. Liao analyzed the reform process and experience of the petroleum market in various development stages. She prospected the future development trend of the oil market and suggested some ways of choices in the future.

Ms. Liao believes that price is the key factor of the whole market reform, and it is also the driving factor in the whole circulation sector. She urges to link up the reform process of oil market across the world to the price and conclude the difference between countries.

Which path should we take to carry out the reform in the later part of oil era? Ms. Liao has given her views on “Gai Ge”(Transformation and Change), a Chinese word meaning reform.  “Gai”(Transformation), means the removal of obstacles,  avoidance of bureaucracy that constraints  transformation and new development model, with opening-up and high efficiency as the principle. “Ge” (Change) , means innovation, making changes in the energy structure, model, technology and concept, guided by the goal of upgrading and creating leading edges in the market. How to strike a balance between the strategic attribute and commodity attribute of petroleum market in China? We should pay more attention to the strategic attribute externally, while constantly developing its commodity attribute internally to create conditions for further development, Ms. Liao said. This will also be focus of GL INFO’s deliberation of the reform of the petroleum circulation industry at next stage. 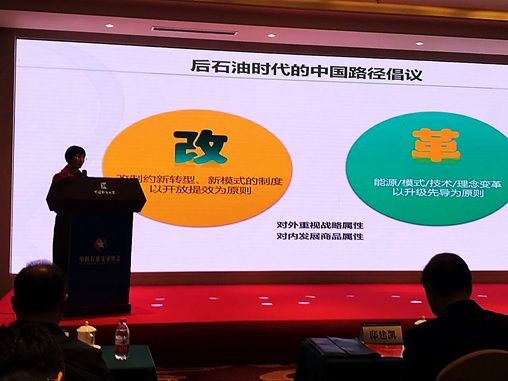 In addition, Ms. Liao expressed her views on enterprise reforms. Enterprises only have to make two choices, either to defend or to launch an offensive. For defense, enterprises can shut down inefficient production capacity in time and optimize their management system, as the petroleum market is undergoing a campaign of backward capacity elimination and innovative cooperation. For offense, enterprises can grasp market opportunities to extend their footprints across the industrial value chain and improve their efficiency. Finally, Ms. Liao expressed her own expectations for the future oil market. "Please join me to embrace the next 40 years and I wish that China’s influence would break new ground in the next 40 years."